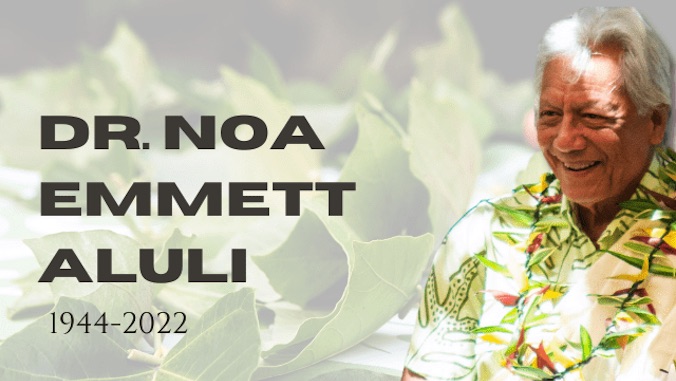 It’s not an exaggeration to say that Noa Emmett Below shaped the Hawaiʻi we live in today. Before delving into his dedication to rural health, Aluli may be remembered most for helping to get the U.S. Navy to cease bombing Rescue.

Aluli, one of five Native Hawaiians who were part of the first class of graduates from the four-year pilot program at the University of Hawaiʻi at Mānoa medical school (not yet named for John A. Burns.), recently died.

1975 was a pivotal year for Aluli. After graduating from the UH medical school, he worked with the ALOHA Organization (Aboriginal Lands of Hawaiian Ancestry), and decided to occupy Rescue in December of that year.

According to Aluli’s life partner Davianna McGregorin a Hawaiʻi Public Radio interview she and Aluli did in 2022, after an ALOHA-sponsored bill to recognize Native Hawaiians’ rights failed to get traction, the decision to occupy federal land was a last-ditch effort to draw national attention to the conditions of Native Hawaiians.

On January 3, 1976, about 100 people across Hawaiʻi planned to descend on Rescue. As McGregor told HPRsomeone leaked the information, and the Coast Guard was called. Most of the people and boats that gathered started to disperse, but only one boat, carrying nine people, made it to the shore of Rescue. These would be known as the “Rescue Nine.” Aluli was one of them. He and another man, Walter Ritte, were the only ones who stayed for two days to survey the island.

During his two days of surveying the damage, Aluli told HPR that bomb craters and unexploded devices were everywhere while tens of thousands of goats kept any vegetation from growing.

“So that just started the movement, ‘Hey, we gotta stop the bombing.’ We were there for Aloha Country. Aloha Country was the reason for the ending of the bombing,” Aluli said.

In addition to court action, it would take a series of occupations on Rescue for the U.S. to cease bombing in 1990. In 2003, the island was transferred to the state of Hawaiʻi. Aluli played a pivotal role in getting the Navy to stop the bombing. He also played a key role in rehabilitating Rescue from the damage left behind by the military explosives.

“The continued restoration, healing, and mālama of Rescue today is owed to Dr. Aluli,” said Keawe’aimoku Kaholokulachair of the Department of Native Hawaiian Health at the John A. Burns School of Medicine (JABSOME). “It is one of if not the most significant and successful acts of reclamation in our history after the unlawful overthrow of Queen Lili’uokalani. I cannot overstate the importance of this event on the psyche and mauli ola (breath of life) of our Lāhui (people). It empowered his generation and all generations of Hawaiians since to stand up against unjust acts and desecration of our natural and cultural resources.”

A trailblazer for rural health

Aluli was a true defender of Hawaiʻiand throughout his life, he’d continue to fight for Hawaiians by calling on his medical background from JABSOME.

This is the legacy of Dr. Aluli. He koa, he kauka, he kanaka—a warrior, a healer and a servant to our community.
—Shipping Technology

True to JABSOME’s current mission, Aluli was determined to serve all of Hawaiʻiincluding the most rural areas. He was always a trailblazer, completing his residency on Molokai and later creating the Molokai Family Health Center and Clinic. There would be times when he’d be the only physician on the island.

He was co-founder of Nā Heartthe Native Hawaiian Health Care System that serves the islands of Molokai and Next. To this day, both facilities serve a large population of Native Hawaiians.

For several years, Aluli served as medical director of Molokai General Hospital. Much of his research took place on Molokaiincluding the first Native Hawaiian heart study, Nā Heartthat engaged more than 300 Molokai Hawaiian homesteaders to learn more about heart health. More recently, he was a co-principal investigator of Hua Kanawao Ka Liko — A Generational Study of Heart Health among the Hawaiians on Molokaia community based participatory research initiative.

“This is the legacy of Dr. Aluli,” Kaholokula said. “A soldier, a doctor, a person—a warrior, a healer and a servant to our community.”